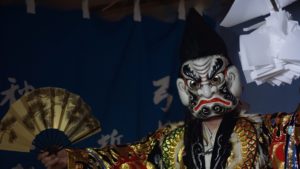 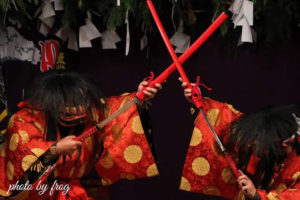 物語 The Story
The play is based on the stories in the Records of Ancient Matters and Chronicles of Japan compiled in 8th century.
The story is about a legendary hero,the ancient Crown Prince Yamato Takeru of the Yamato Dynasty and his conquest of the eastern land.

Soon after subduing enemies in Kyushu and returning to the lmperiai Palace in Nara,the Prince was commanded by his father,Emperor Keiko,to embark on an expedition with his army to subdue the evil tribe Emishi in the eastern land.On the way,he received a sacred sword and an amulet from his aunt,Princess Yamato,at the lse Grand Shrine.Upon his arrival,with a ruse organized by the chief,two brothers from the Emishi tribe attempted to trap the Prince and burn him to death by taking him to a field and setting it alight.However,with the help of the sword and the amulet,the Prince managed to escape from the danger and defeated the Emishi.